While I began writing songs when I was thirteen, I never wrote poetry as a kid - largely due to spending most of my life assuming that songs and poems were one and the same. But after the atrocious event of Bob Dylan winning the Nobel Prize for Literature in 2016, I was infuriated, considering of all the relevant contemporary novelists that could have won the specific award. Bob is a musical icon, sure. But as far as actual literature goes, Dylan had only written the jibberish of "Tarantula" in 1971, before his more recent memoirs. And here the Swedes were now claiming that songs were literature? As both lyricist and novelist, I scream at the top of my lungs that this is simply not true.

Songs, as great as they can be, are essentially what I prefer to call "ego-jingles," a frontman/woman's beating of chest whose sole purpose, like it or not, is to reduce itself into a commodity to sell albums for a label or beer at the club. Songs, when written well, or rather, if there is enough money behind your "team," are lavished with praise and press, to help sell ads in print magazines, online sites, and if you're really lucky, to help a car commercial appear more in touch with the today's vague zeitgeist.

Poems, on the other hand, are the lonely, thankless road - even if the poetry is "amazing." Poetry is the true emergency, the personal means to end, the cry for help, the declaration of independence, the the scream in the forest that makes no sound, meant to be savored either in lightning strike moment of the poet's live reading or the brief repose from their book.

Poetry has been flowing from me now more than ever, largely due to the solitude and allowance of refection in the desert. Big ups to Rich Soos at Cholla Needles for the opportunity, over and over. In this month's issue, I have four: "Late Bloomer With A Love Supreme," "Paper Cuts," "Deep Root Delusion," and my favorite, "Heat" (pictured below). 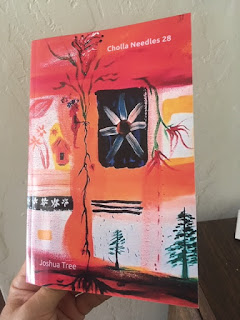 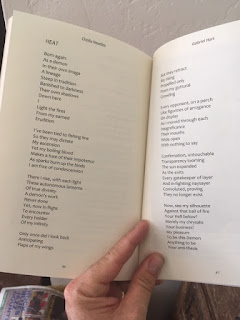