My debut novel VIRGINS IN REVERSE/THE INTRUSION out now! 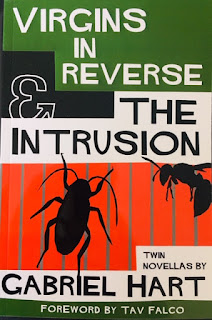 It is with great exhalation this week that I announce the release of my debut novel VIRGINS IN REVERSE/THE INTRUSION on Joshua Tree's Traveling Shoes Press.

At 170 pages, it is comprised of "twin" novellas. Two deceptive morality tales - think Day of The Locusts/Miss Lonelyhearts - only these stories repellingly intertwine. The stories are not sequel/pre-quel or in anyway traditionally linear, but third mind guided through phantasmagorical noir scenarios after the sidewalk of the narrative's "speculative memoir" runs out of historical accuracy. Memory is such a deceiving thing, after all.

I spent nearly ten years on this book. From its naive inception, to its mind-numbing bureaucratic hostage, the false-starts and stops, the constant art imitating life parallels that still shock me to this day, to its return to my hands and a great humble and hungry publisher behind me. With its reception thus far, I am now thankful it took as long as it did - it would seem regretful if it came out anytime before now, to run the risk of it being anything less. If it was a crap book, I believe it would have merely evaporated in all the chaos - especially considering how many brilliant people I have to thank who lent their eyes and opinions.

The great Tav Falco really makes it shine with his initiation foreword, adding a whole other layer of intrigue to the book. He made connections between the two stories I would have never even dreamt of, and the way he writes is so vital, uncanny, and otherworldly that I couldn't have imagined anyone else more fitting to come to my rescue at a precarious time where the book was in absolute limbo. For someone I admire as much as Tav, I was grateful he took such a leap of faith with this.

Again, enormous gratitude to Jon Christopher and Tania from Traveling Shoes, who really rescued the book and are wholly responsible for making it available to us today. I am excited to grow with a new publisher in real time and look forward to our time together. Jon also designed the cover and executed it not only how I imagined, but in the end better than I could have thought.

And to Jean-Paul Garnier, my hawk-eye editor who spent more time with the book than anyone besides myself. He also uncovered great synapses in the plot that made it sparkle when I was so burnt out and disillusioned that all the words were beginning to look like Hieroglyphics.

While there is a proper acknowledgments page at the end of the book, I would like to end this by giving a special shout out to all those who didn't make it in there on account of timing, who helped with the proofs, last minute look-sees, and blurbs to give the book further grease: Rich Soos, John Tottenham, Rachael Polokoff, Seth Miller, Niki Pretti... thank you. If I forgot anyone, blame my brain and not my heart and please let me know.