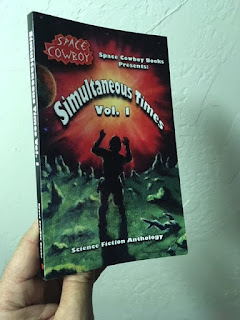 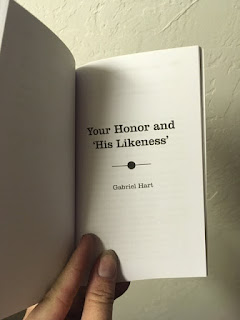 Some time ago, my editor Jean-Paul Garnier from Space Cowboy Books asked me to write a sci-fi story for an anthology he was putting together. I took it as a challenge to get me out of my noirish discomfort zone, to see if my voice could work within different parameters.
The result is "Your Honor and 'His Likeness,'" a paranoid tale of human origin that takes place in the unlikely backdrop of a pressure-cooker courtroom. Desert rat Jason Krieger has gone missing, as a fragmented scene of the trial surrounding his disappearance unfolds. His best friend, who we only know as "Mr. Barnes" is another accessory suspect called to the stand. He is in possession of Jason's cell-phone, left behind at the scene of his vanishing. What we hear on the cellphone's voice recorder history proves a ground-breaking diverging of not just the case at hand, but courtroom protocol, as the Judge loses his composure and chaos spreads to the jury (not to mention, changing everything we have been taught). 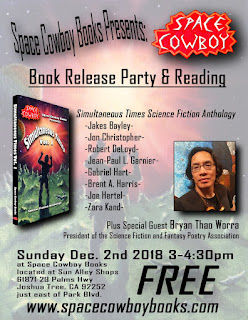 I am "honored" to be among seven other authors in this anthology, including Jean-Paul ("Fucking Like Animals"), Jakes Bayley ("The Banshee"), Jon Christopher of Traveling Shoes Press ("In The Heavens As On Earth"), Joe Hertel ("The Mechanics"), Robert Deloyd ("Katie Of The Stars"), Brent A. Harris ("A Hard Day Hunting Dinosaurs"), and the debut sci-fi story from surrealist painter Zara Kand (One's Moon).

The official release party will be this Sunday, December 2nd at Space Cowboy Books in Joshua Tree, 3pm. All authors will be in attendance, along with very special guest Bryan Thao Worra, President of the Science Fiction and Fantasy Poetry Association. Please, join us!