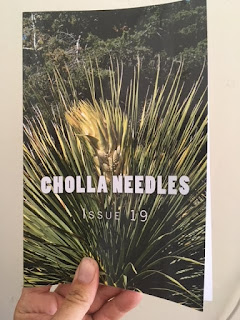 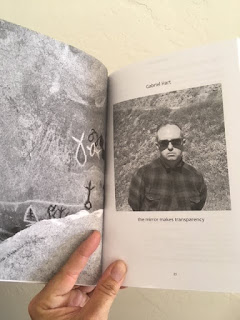 Once again, I am appearing in a new issue of Cholla Needles, the High Desert's monthly literary anthology. With nine other authors / poets, I have my own six-page section in this installment - a triplet of poems ("If You Only Could Have Known Me", "Patina," and "Untitled") and a short story "Lucid Dreaming In D Major." The latter is a hallucinatory take-over of what may happen when you fall asleep listening to Roger Miller's version of "What Are These Things With Big Black Wings" in the middle of a heat wave if you happen to harbor moral baggage with your estranged editor.

Rich Soos, the man behind Cholla Needles (which is now known as Cholla Needles Art and Literary Library now that non-profit status has been bestowed), has been publishing monthly collections like this since 1973. His early anthology series Seven Stars even published early works by Charles Bukowski, among countless others. Soos, a poet himself, has masterfully focused on the overlooked medium of the Haiku for his prolific output. For me, one of his most visceral efforts is his book "Fiddlin' Around In An Orchestrated War," a war-themed Haiku collection that contains a not just a lifetime... but a deathtime, in each economical, solemn outburst. Your stomach will churn with breathless empathy, thanking God you may live a life of trivial challenges in contrast to these realities of true sacrifice.

A true man of God, Rich Soos has helped ignite a tight-knit yet ever-growing literary community up here through Cholla Needles and his monthly open-mic readings at Space Cowboy on the second Sunday of every month (see you this Sunday), creating a Church of The Word for many of us. While some believe writing is something that is earned for a select few, Soos believes that everybody should write, that it's an inherent other voice in all of us that he implores us to explore. A refreshing perspective, as he altered by own elitist attitude when he expressed this in his own "Personal Poetics" Teddy Talk last year.