A PAGE TORN OUT OF THE WEEKEND - A NON-LINEAR PORTLAND REPORT: 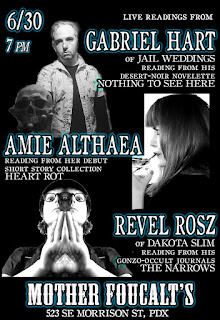 "In The Heavens, Not The Clouds" 6/28/18
This pen observes me flying to Portland, OR interrupting a book I thought I couldn't put down (Susan Rukeyser's brilliant Not On Fire, Only Dying). The motives for this trip are multi-fold: Tonight, I do the voice and guitar thing at The White Owl, while Saturday I read from Nothing To See Here at Mother Foucault's. In between all of this I will see friends - a vital concentration of them, in fact. All... but one. The one who was often my shadow, and I often his. The one who no longer lives, among the many who also flipped the switch - and those I would never make pale in comparison. But Matty Rue went into the black with such a perpetually irreconcilable estrangement and I will never let the dust settle of his sudden kick up on St. Paddy's Eve of 2015 (St. Matty's Day).

I used to blow through Portland once, sometimes twice a year with Jail Weddings and bands before. But I have not returned in five years, three years since his death. His passing nearly made that city dead to me as well. So, the real reason snaking its way through all of my work and pleasure will be a solemn swear to chase his ghost in order to let in some kind of peace, finally... A guy can hope.

I often wonder if he is still stuck in that train station, where I saw him a week after his death, when Dr. Wagensomer hypnotized me in order to confront my grief head-on. There he stood, suitcase in hand, too ashamed to look me in the eyes. That station was his lonely purgatory, the autonomy of life forever out of his reach. He was now part of the scenery of transition, another sad face awaiting absolute uncertainty. He asked me if I wanted to know what he felt like when he died. Before I could answer, I was engulfed in the most terrifying full-body euphoria, so overwhelming that I too, felt I may have just dissolved into the ether. I heard myself moan, panicking for Dr. Wagensomer to bring me back up. I returned half-gasping, not feeling any where near "at peace," but much more accustomed to his consequence. Baby steps. The biggest step being that I had, without a doubt, made a clear connection to him beyond the urn.

The irony here is that I write this under the unlikely but more practical influence of a kindred drug, having procured a Vicodin for help nurse the residue of a painful concussion I sustained last week, after a psychopathic man-child sucker punched me, apparently for having the nerve to relax on my own property. Fascinating what people do when they don't know how to peacefully break through to the other side.

Ironically, on top of irony, this is how Jackee died. She hit her head and complained of headaches for days after, before finally succumbing to acute trauma. No one took her seriously and many believed she was trying to get attention. What kills me now: I loved her especially when she wanted attention. While I am likely in the clear, now ten days after the assault, I clearly should have seen a doctor. Funny, how we think we are aware of what is going on inside our heads. Like a two-way mirror interrogation, we are questioned on the outside but will never be completely privy to the spies inside of us.

But here I fly, among the clouds. I am trying to feel close to Matty by convincing myself to believe in Heaven. It is not working. To achieve this, I believe we must get even higher. The Heavens, not Heaven. Absolute darkness, to return from whence we came. 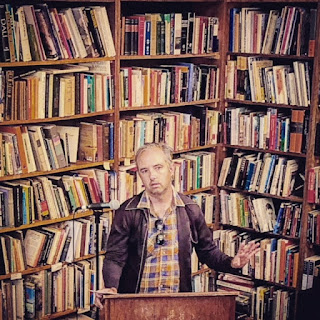