Today, Lit Reactor posted my first-ever column for the site (until this point I had mainly done author interviews). It was a trip being invited to talk about my own book on there for once, and I'm grateful for the opportunity.

What I Learned By Writing A Return to Spring

Posted by Gabriel Hart at 7:52 AM No comments:

A little late to post here, but I figured it could use some further posterity.

Posted by Gabriel Hart at 7:44 AM No comments: 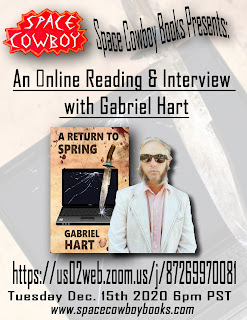 Save the date and join us on Tuesday, December 15th at 6pm (PST) as we usher in the release of my new Palm Springs/Spring Break Riot-Noir novelette "A Return To Spring" (Mannison Press). This free live online event is brought to you by our local Space Cowboy Books and will be mediated by Jean-Paul Garnier. To attend, register at the link below:

Posted by Gabriel Hart at 9:03 PM No comments:

My Palm Springs/Spring Break noir-novelette "A Return To Spring" out now on Mannison Press.

I'm gracious to have something physical to show for myself at the tail end of our very un-physical 2020. My new crime-fiction novelette, "A Return To Spring" is out November 18th on Florida's Mannison Press (they also published my short story "Wrathchild's Atrophy" in their "Little Boy Lost" anthology earlier this year). It might seem out of season to release a Spring Break themed book in winter, but our tomorrows seem less and less guaranteed the way things have been going in 2020, so here we are, no regrets. 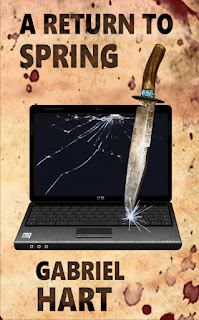 The story is a speculative stab at the Palm Springs Spring Break riots of 1986, an event that permanently changed the city as we knew it, especially in terms of tourism and demographic. In the 80s it was THE place for Spring Breakers to panther, party, and eventually cause trouble; though you only heard vague stories like a game of telephone until three years ago, when footage of the 1986 riots finally surfaced here. I'm not one to clutch my pearls, but I was terrified when I saw that footage. It left such a deep imprint on me that I spent the rest of that week calling up people like Sean Wheeler and other desert rats to ask what it was like to witness it in person. It seemed akin to an Altamont-scenario for Palm Springs, where it ushered the end of an era: from the annual season of young hyper-hetro men invading downtown to go wildin', causing the Venn diagram of masculinity to eclipse into the notoriously civilized gay community it is now. After the riots, mayor Sonny Bono ordered police to start ticketing/arresting any kids that would do so much as to step off a curb into the street, making any semblance of Spring Break unsustainable from then on.

For me, seeing the footage also brought back the bedlam of Woodstock '90, where the rapes during (an no doubt inspired by) Limp Bizkit's set further cemented my hatred for nu-metal and the industry that would gleefully promote this new soundtrack of celebrated ignorance, but that's a whole other story of pop-culture triggering.

So with this footage of Palm's Spring's low point burned into my head, I was asked to submit a story for a Palm Springs Noir anthology, though the deadline was not on my side for what I really wanted to do with it. But I wrote the story anyway, now with more time to stretch out in, to speculate what else could have happened in that melee, given the disparate cultures of the Coachella Valley like the Morongo Band of Mission Indians, and how they might have reacted to the white-bred chaos. Luckily, "A Return To Spring" ends up standing on its own little spine as part of Mannison Press "Mini-Books" series. For a crime-fiction book, this format is sort of, uh, cute as fuck - fun-sized to fit in the ass-pocket of your jeans like some cool vintage pulp contraband (just don't sit on it, man!).

Enormous gratitude to Mannison Press for being so solid to work with.

I've got a stack of signed paperbacks I'll let go for $8 apiece. PayPal mrgabrielhart@gmail.com or Venmo me at gabriel-hart-40 and don't forget your address.

Posted by Gabriel Hart at 10:19 AM No comments:

It's a thrill to get a piece accepted to a venue you're already a big fan of. Shotgun Honey has been a prominent flash-noir leader for years now - their authors are legion and I'm grateful to be one of among them.

My piece "Church of War" brings the battlefield home, but bare-fisted. It was partly inspired by my time working for Mil-Tree, a non-profit in Joshua Tree that aims to heal the wounds of war. Needless to say, nothing even remotely close to what happens in my story happened at my time there. I was fortunate enough to meet some of the nicest, well-adjusted guys and gals there whose battle tales were the last thing on their minds when wanting to chop it up with me. You might consider the main character Bradley Miller as a fever dream of my sub-conscience, who might have felt unworthy in their presence as I got to hear their everyday stories of integrity/humility.

Submission call for GHOSTWRITING THE WIP - a non-fiction project about writing.

Hello,
I'm reaching out to writers in my inner/outer circle to gauge interest in a non-fiction project about writing, which I am calling GHOSTWRITING THE WIP.

Most of us have used ourselves in our work. It's often inevitable, whether it be us writing in the first person consciously based on ourselves, or us consciously trying to divorce ourselves from the main character – only to find that a lot of that character's qualities end up mirroring our own anyway. We'll often learn a thing or two about ourselves we may have been suppressing when choosing that latter path – like amateur psychoanalysis.

The prompt: What about our works-in-progress/published work that predicts the future? Have you ever included a scenario or character in your work that was not based on your past or present – either too far out to be believable or just properly abstract – that ended up taking some shape or form in “the real world” far after the fact?

I've had a substantial handful of these occurrences. I refuse to think I am the only one, so that's hopefully where you come in.

I'm not necessarily looking for something as grandiose as Emily St. John Mandel's Station Eleven being published hot on the heels of our current pandemic. I want this to come from a much more personal vista – which I see as having the potential to yield even stranger results that might be more difficult to explain away.

It's important to emphasize that this is not to imply any of us are claiming to be armchair prophets. What I want to stir the pot about is the non-linear quality of time, its relation to creativity, and how writing can radiate tentacles of the unconscious to reach out and touch something more tangible than we may think at the time of the passage's conception.

I'm also welcoming innocent journal writing into this, as well as third mind techniques of automatic writing and cut-up.

I'm looking for a chance to interview some of you over email, or else offer the opportunity to write your own nutshell account that I may be able to pull a quote or two from.

Once I get an idea of interest, I'll be pitching it to a list of literary venues as an article, essay, or maybe something larger.

Posted by Gabriel Hart at 11:21 AM No comments:

Somehow this will be my second dog story for Simultaneous Times in less than a year? I guess I'm "the dog story" guy now.
"Black Pit Blues" is a speculative fiction tale using a local phenomenon as a springboard - the abandoned Desert Hot Springs Pitbulls breeding with coyotes in Whitewater. In BPB we witness animal Darwinism outliving the mental illness of a troubled but well-meaning human.
Music by the unmistakable RedBlueBlackSilver.
Click below for link.
"Black Pit Blues" by Gabriel Hart on Simultaneous Times, Episode 25.
Posted by Gabriel Hart at 12:22 PM No comments: